South Korea. Southern half of Korea. After watching so much South Korean Drama, I have been deeply mesmerised by South Korea’s beautiful ancient and modern culture. It was my first trip to South Korea. I have always resist the idea of going to South Korea as I always worry about the Language Barrier. This time I decided to embrace my adventurous side and armed ourselves with a comprehensive travel itinerary and Google Translate App. Winkz To be honest, the language barrier for Korea do pose some challenges for me to research on various places to visit or food to eat. Thankfully, there is a abundant of resources in Internet. However, it still take much more effort for me than the places I been previously. Hence, some of the areas I just prefer to go around exploring and pick and choose the food place while we are there (base on the crowd in the place). Gentle Reminder .. Always get your travel insurance once you booked your travel. It is better to be insured earlier.

We took a flight out from Singapore to Seoul. It was a 12 days 11 Night trip. Day 1 was a super short day as we took up Singapore Airlines promotion tickets. We only reached Korea Incheon Airport at 1130pm. We planned to stay 1 night in a hotel near the airport and make our way to Jeju Island the following day. We bought the Korea Sim Card from Singapore Changi Airport – Changi Recommends Counter as the shops in Korea will have closed when we reached. A lot of Korea travellers rent the Korea Wifi Egg (Wifi Router) for using internet. We decided to get Korea Sim Card so that it is easier to move around separately.

After checking into the hotel, we went to have a late night supper at a nearby restaurant. The service staff doesn’t understand and the menu was also only in korean. Thankfully, there were some pictures in the menu. I just picked based on the pictures. I also use Google Translate app to translate some of the korean words on the menu. The app is a saviour.

After having a satisfying supper, we are off to slumberland. Can’t wait to set off for the romantic Jeju Island…

We went to explore the area around our hotel for a breakfast place. We stumble upon Caffe Glen.

After checking out from our hotel, we made our way to Unseo station. Luckily, Unseo station is within walking distance. We were pulling our luggages all the way there. We took the Incheon Airport Railroad Express (AREX) train to Gimpo Airport where we will be taking our flight to Jeju Island. Before boarding the plane, we went to get our lunch at a Japanese restaurant.

We took a flight out of Seoul and off we land on Jeju Island – Renowned for its natural splendor.

After checking into the hotel, we took a walk out of our hotel and explore around. We passed by a BBQ meat restaurant. There were some customers. We decided to give it a try.

After an awesome dinner, we continue our exploration down the streets. There were cafes, beauty shops and fashion shops. We stopped at Paris Baguette Cafe for dessert.

We love to visit beaches. First stop for the day is Hamdeok Beach.

We took tonnes of pictures and stroll around the Hamdeok Beach. Breathing in the stunning diamond clear sea.

Next, we drove to Manjanggul Cave. The popular tourist spot and frequently featured in the Korean Drama. I can finally see it for myself.

After such a long walk, I can’t wait to sit down and have a good meal. We make our way to Black Pork Street

We decided to take a quick look at DongMun Market.

Such an eventful, fun, and tiring day. Can’t wait for tomorrow to come… 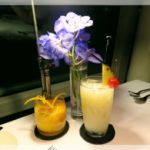 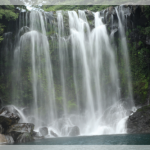